Circulating widely on the internet has been the outrageous claim about the level of pain experienced by a woman during childbirth. Some people have even gone to the extent of placing the claim on various images and circulating these.

This is a classic example of the gullibility of the majority of the human race, and goes to show the sad state of brainwashing that has overcome most people. Most people have been forwarding the emails around, or reposting them all over Facebook, without taking the time to even use their brains and think for a moment whether the claims are truly possible.

The following image is just one such example of the images floating around: 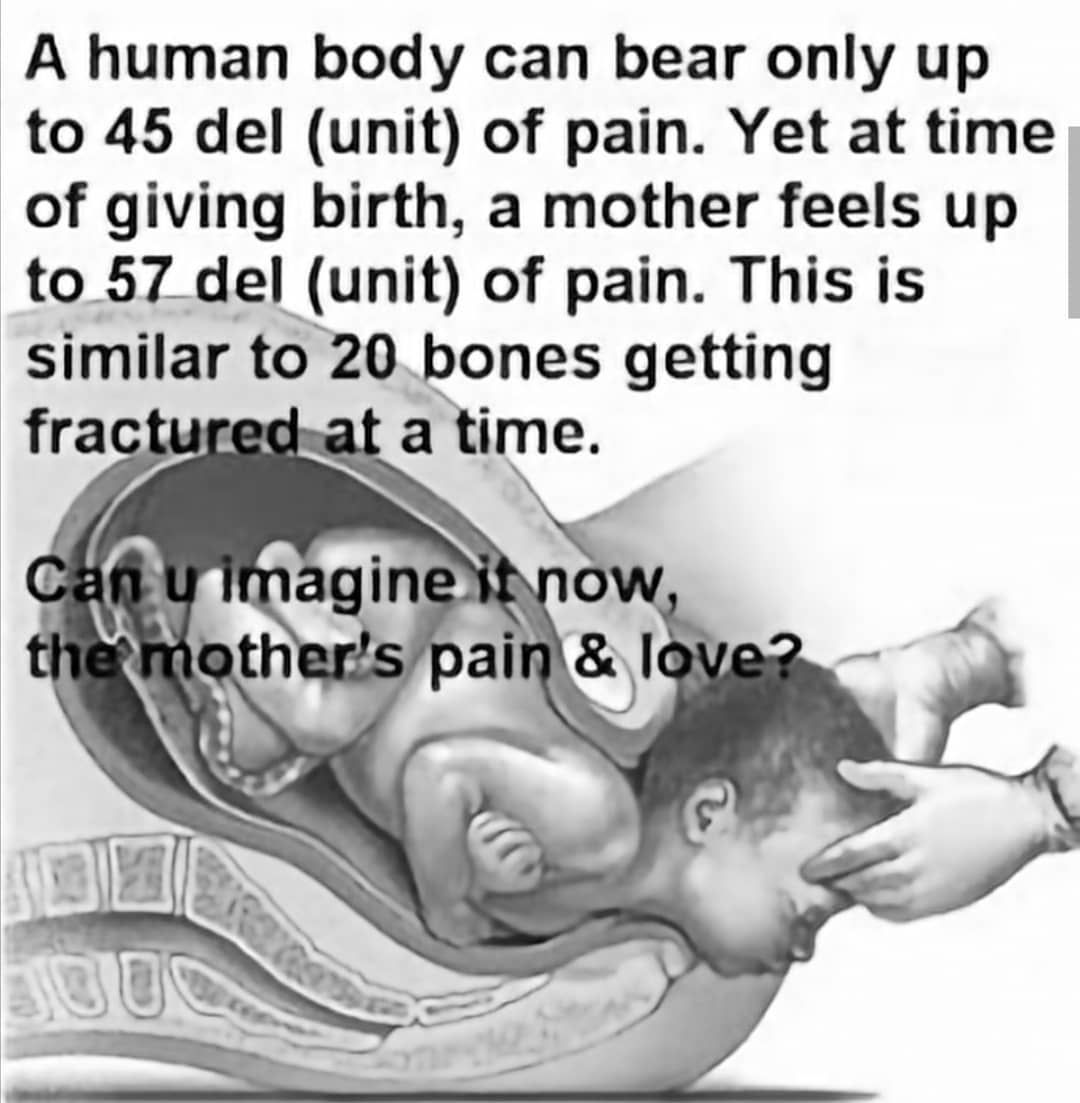 The image creators have sometimes used their own opinions or expressions in the text, but it always contains the same false claim.

But at the time of giving birth, a woman feels up to 57 del (unit) of pain.

This is similar to twenty bones getting fractured at a time.

This example has obviously been rewritten, as it contains grammatical errors, but nevertheless it is just another fake image which illustrates how many people have lost the ability to be intelligent.

Intelligence is not memorising, reposting or repeating something that you heard, but instead it is the ability to analyse and question whatever information you come across. Now let’s use our brains to analyse the childbirth pain claims about what the mother can possibly bear.

2. There is no such unit called a Del. Not just for pain, but for anything. It just doesn’t exist. Amazing how many people have fallen for these lies considering they would have never heard of a Del before.

3. There is no way to measure pain. So how can you measure how much pain a woman giving birth can bear, if you can’t even measure pain in the first place.

4. The amount of pain of woman feels in childbirth is a completely individual experience. Some women even enjoy the experience. Let’s face it, the babies are different sizes, the birth canals are different sizes, some women still give birth in the natural upright position instead of the “modern” position of lying down, so there are many factors which contribute to a women having harder or easier deliveries. It is just not going to be the same Del of 57 each time. Any woman who has had more than one baby can also tell you the pain is not always the same.

5. It is impossible to calculate the equivalent pain of another incident in the human body compared to childbirth. At best, there was an incident at some point in time somewhere in the universe where a woman who once had a baby fractured exactly 20 bones, at which point she exclaimed “the pain I feel is equivalent to the pain I went through in childbirth”. But even if true, has anybody bothered to survey women who have fractured more or less bones. You may get one woman say 1 bone fracture was worse, or a another mother who fractured 100 bones say that the pain was less. The possibilities are endless.

Final Message to the general public – Wake up and start to think.