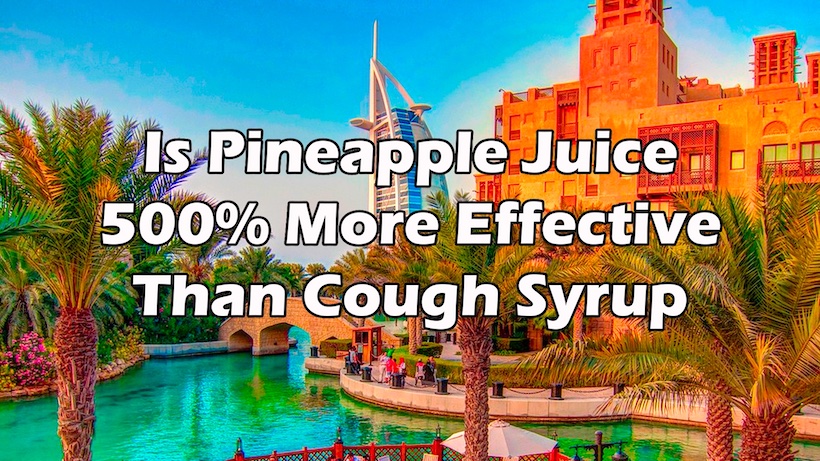 For years, there has been a meme circulating that pineapple juice is 500% more effective in stopping coughing, compared to cough syrup, due to the presence of the enzyme Bromelain.

The roots of this claim seem to stem from a 2010 study published in an unpopular medical journal, Der Pharma Chemica. The problems with this study were that it looked at tuberculosis, not coughing specifically, and that they did not use pineapple juice alone, but a combination with pepper, salt, and honey.

In regards to the 500% more effective claim, this was described in meme footnotes as a separate study finding patients recovered 4.8 times faster from taking pineapple extracts compared to over the counter medications. But this study has never been seen or heard. Both myself and other researchers have never seen a trace of it anywhere, so it appears to be fabricated.

Now pineapple does contain bromelain, which has been studied extensively. A review published in the Pharmacologyonline newsletter in 2010 showed that it was effective in reducing congestion, improving breathing, and suppression of the cough.

A 2016 study published in Pub Med Central compared the intake of honey to stop a cough, versus a honey and bromelain combination. Both worked well, and stopped the cough intensity within 30 minutes. But although the bromelain group had slightly better results, since the honey only group also had a reduction in cough intensity, the researchers concluded that they honey was more important to take.

So, while it appears that the claim that pineapple juice is 500% more effective than cough syrup is untrue, there is some evidence showing that bromelain in pineapples is beneficial for coughs. But I would take it in combination with honey, cayenne pepper, and salt, with pineapple being the least important ingredient in that concoction.
For more natural cough remedies, please visit my website, at healthglade.com

The Future of Plant Medicine Summit

99 Surprising Foods Which Have Gluten