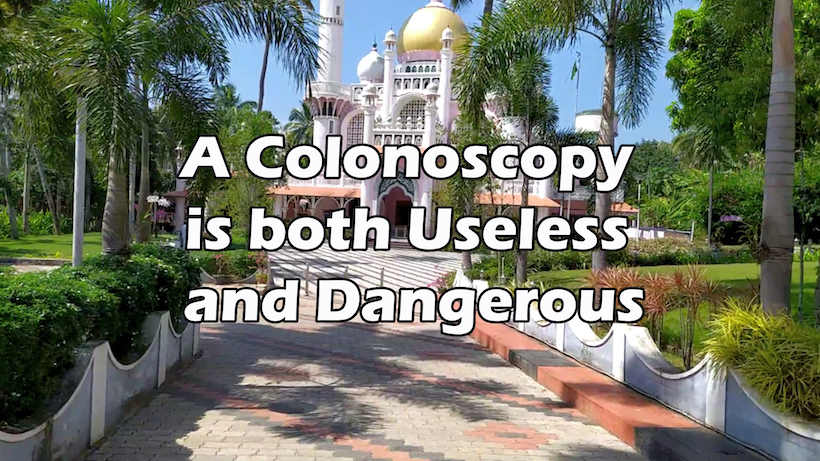 This video, A Colonoscopy is Both Useless and Dangerous, was filmed at Kaduvayil Juma Masjid, in Karavaram, Kerala, India.

Colonoscopy is a common diagnostic procedure, but like many of the procedures in a western doctor’s repertoire, the dangers are never fully disclosed to the patient. But don’t worry, I’m going to do that for you in this video, so you can make an informed decision as to the viability of the surgery.

One of the major risks, which can lead to death, is a perforation of the colon. The surgical instrument can make hole in the colon, and you can bleed to death, or face other serious complications. The claimed death rate is 1 in 1000, and they say 1 in 350 do serious harm, and 4% of people end up back in hospital within 30 days of their operation.

But like other figures within their industry, they can easily be fudged, by listing the death or damage as something unrelated to the colonoscopy. In fact, many of the risks I will go over, are never attributed to the colonoscopy, instead being classified in their own areas.

If you are not killed by the colonoscopy itself, you may be killed by the anesthesia, or permanently injured. The risks of anesthesia require a whole video for themselves, but it is something not to be taken lightly, as many people never recover after going under.

Another serious consideration is the inability of hospitals to properly sterilize the tools, meaning that the poop particles, blood, or bacteria from a previous patient may be transferred inside your body, causing numerous health issues which may not be initially linked to the colonoscopy procedure.

But the risks begin before the colonoscopy takes place, with the harsh laxatives used to flush the colon wiping out many colonies of beneficial bacteria, and causing a severe dysbiosis. Sometimes, the gut can never recover, with the bad bacteria taking hold and turning the digestive tract into a waste and toxin producing factory.

The evidence shows that colonoscopies are quite dangerous, and according to some studies, pretty useless. A study published in the Annals of Internal Medicine found that colonoscopies missed virtually all cancers located on the right side of the colon, and this is where 40% of colon cancers occur. Other studies have shown similar results, with the detection rate of the disease they are supposed to detect not making the procedure worthwhile.

In fact, there are other colon cancer detection methods available to doctors which are far less dangerous, and give much greater accuracy in results. So why do they still do colonoscopies? Well, the simple fact is … money. Some colonoscopies cost up to $20,000 per procedure. The doctor prescribing it always receives a seriously juicy kickback.

It has been estimated that if the kickbacks were stopped, colonoscopy procedures in the US would drop by about 1 million per year, and rates would mirror that of other developed countries, who favour stool tests, and rarely prescribe colonoscopies.

Even if colon cancer is detected, studies have shown that the death rate remains almost exactly the same, and that for every 2 people whose deaths were prevented by colonoscopy screening, 5 people will have serious medical complications, including death. You might look at all the evidence and statistics and think, colonoscopies are a scam.

Personally, I have had a colonoscopy, and I would never get one again. Partially because I am now aware of this information, which I wasn’t back then, and partially because it was an incredibly painful and miserable experience. Why would I risk injury or death when there are safer, cheaper, and more accurate alternatives available.

To learn about these safe colonoscopy alternatives, visit my website at healthglade.com

Science of Healing and Consciousness Masterclass

The Most Effective Detox Product on the Planet