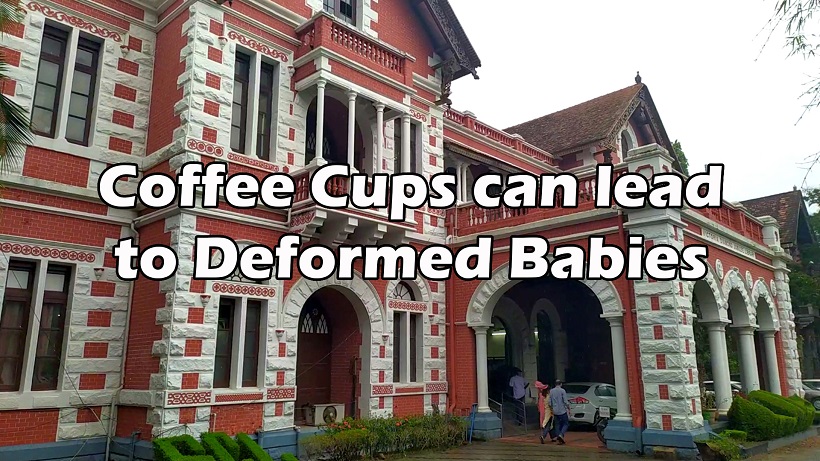 This video, Coffee Cups can lead to Deformed Babies, was filmed at State Central Library, in Thiruvananthapuram, Kerala, India.

Coffee cups. Those cute white ones made from Styrofoam. Pretty handy to get your coffee in, but also pretty deadly, for you and the environment.

These monstrous creations have a garbage dump half life of 500 years. They practically last forever, and their use has catastrophic consequences for the environment. But if you don’t have any morals, and don’t care about killing animals and the environment, then maybe you will wake up to the fact that using coffee cups is slowly killing you.

Styrofoam leaches dangerous chemicals into any liquid that it comes in contact with. One of the more deadly ones is styrene. It’s been linked to causing breast, ovary, prostate, leukemia and lymphoma cancers. It sends your hormones out of whack, destroys your thyroid, affects the central nervous system, and causes hearing loss, weakness and fatigue, depression, and genetic damage.

Those are common problems experienced by Styrofoam industry workers, but you decide to pour a boiling hot liquid onto your Styrofoam, so it leaches astronomical amounts of chemicals into the coffee, and then drink it so it goes straight inside the body. The styrene chemical which causes all of this damage is absorbed into the bloodstream and tissue, and pumped around to wreak havoc on all corners of your body.

And guess what? That is the good chemical. Styrofoam also contains Benzene, an undisputed known carcinogen. It’s a Class A carcinogen, which is the worst grading of them all. It doesn’t have to cause cancer to kill you. Long term exposure can lead to coma or sudden death.

Exposure to both styrene and benzene can lead to infertility and miscarriages. This may be a good thing, because babies born to people such as coffee cup drinking freak parents are often deformed, with many being born with serious physical and genetic abnormalities.

While having a hot coffee in a Styrofoam cup is an incredibly stupid thing to do, it’s equally as stupid to use it for any other purpose, including food storage, or any activity where you can breathe the vapors in. Plus, I have already mentioned the environmental damage. So just avoid it whatever you do.

So, what is a safe alternative to these killer coffee cups? Well, to be honest, you shouldn’t be drinking coffee at all. The side effects of coffee on a human body are far more wide reaching, and really require a separate video to detail them. Go to healthglade.com and search for coffee to find more information.