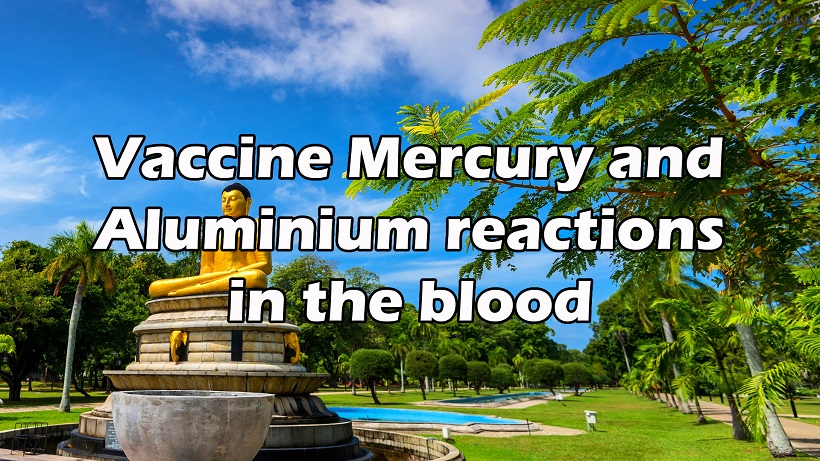 This video, Vaccine Mercury and Aluminium reactions in the blood, was filmed at Viharamahadevi Park & Colombo Municipal Council building, in Colombo, Sri Lanka.

Check out this Vaccines contain Mercury and Aluminium video

There are a lot of videos on Youtube where people have added Mercury to Aluminium, and the reaction it produces is incredible. It’s fascinating to watch how it amalgamates and produces these alien looking structures.

But it makes you ponder. If we are injecting vaccines with aluminium, and other vaccines with mercury, sometimes one after each other at the same doctor’s appointment, and sometimes in the same vaccine, does this reaction occur inside the body?

There are going to be at least 3 excuses used by Big Pharma and their so-called scientists to dismiss this possibility. The first is that the mercury is already bound inside another compound. This is irrelevant, as we know that mercury can break free from compounds, such as is seen in the videos of off-gassing from dental amalgams.

They will then bring up the third excuse, that the aluminium will then oxidise quickly as there is oxygen in the blood, and once oxidized it won’t react with the mercury. Well, this may not even be true, and the mercury may get to it first. But let’s play along and we will beat their excuse from another angle.

In fact that oxidation problem was shown in many of the mercury/aluminium videos on Youtube, but they got around it by adding some acids to the aluminium oxide. This exposed a fresh layer of aluminium, and the reaction in the videos then took place.

The stronger the acid, the faster it is to remove the oxidation, but aluminium cleaning tutorials on YouTube will even use “not so strong acids” like vinegar and lemon, with a ph of around 2-3, as an agent to remove it.

Now the human body does contain acids or produce acids around this range. A few examples are hydrochloric acid, many different types of amino acids, and for anyone who has ever done exercise training, they will be familiar with lactic acid.

So any aluminium from vaccines will almost certainly come into contact with acids inside the human body, potentially opening the door for a reaction to occur when it comes into contact with mercury from a vaccine, even if the vaccines are taken many years apart.

This of course is theory. It’s a very plausible theory, but as we can’t either create an artificial human body environment to test it in, or put a camera inside the human body and wait around for it to happen, it’s going to be impossible to ever prove it right, or prove it wrong.

So while we can’t prove that the same reaction in the video takes place, it has been proven that the combination of mercury and aluminium from vaccines inside the human body does produce a great deal of harm. There are 2 studies you can find on PubMed Central, called Synergism in aluminum and mercury neurotoxicity, and Exposure to Mercury and Aluminum in Early Life: Developmental Vulnerability as a Modifying Factor in Neurologic and Immunologic Effects, and both of these should be sufficient proof for anyone denying a harmful reaction, although there are many more studies available.

For more information on the damaging effects of vaccines, mercury, and aluminium, please visit my website at healthglade.com

Stillbirths are caused by Fetal DNA in Vaccines

Your Best Sleep Ever

How to Create a Young Metabolism

How to Create a Young Metabolism

Impossible Whopper can give a Micropenis

Vaccine Mercury and Aluminium reactions in the blood