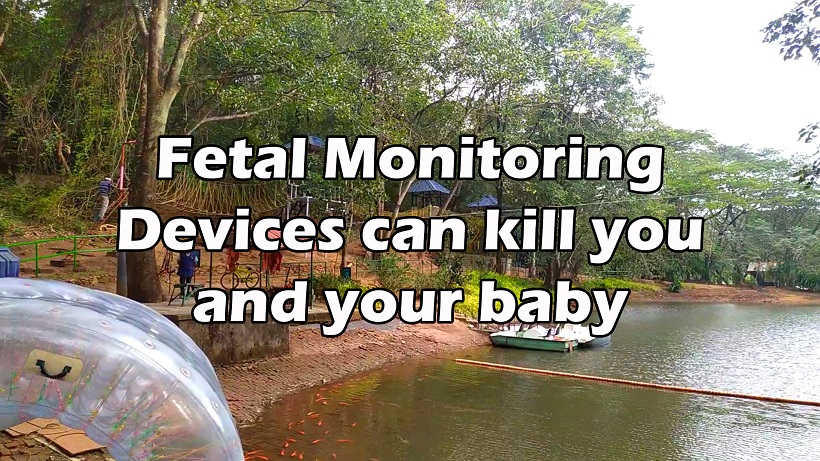 This video, Fetal Monitoring Devices can kill you and your baby, was filmed at Activity Lake, Thenmala Ecotourism Adventure Zone, in Thenmala, Kerala, India.

Internal Fetal Monitoring – it doesn’t sound too bad. Just monitoring a baby during childbirth. Just sticking something on its head to send back data. But, how does this cable stick to the baby’s head? Many parents don’t know that the end of this device is like a metal corkscrew, similar to what you use to open a bottle of wine. That’s right, they literally screw the cable into your baby’s head while it is still inside the womb. What a truly barbaric and cruel practice.

Plus, it is not possible to attach the fetal monitoring device during the early stages of childbirth as the membrane has not ruptured, so they have to artificially rupture the membrane, which creates an infection risk, and what they don’t realise is that the environment the baby was in, has now been altered. The water was there as a protective mechanism. It’s there for a purpose. The baby and the umbilical cord receive immediate pressure and blood flow changes at a time the body was not prepared for, and that induces a stress response. So the monitor shows that the baby is stressed, but it was putting the monitor on that was the cause of the stress.

Now all of this is based on the assumption that the fetal monitors work properly, but a lot of the time they don’t. The two most common phrases uttered by doctors and nurses are “just ignore that” or “don’t worry about that”, as wrong data comes through or lights flash when they are not supposed to, and the mother or the father asks “what’s going on?”.

For the data that is received from the monitor, and that is read accurately, a lot of the time you may as well throw it in the bin. For example, did an abnormal variation in the heart rate always exists, or was it caused by attaching the fetal monitor. There have been no studies done comparing a baby which has a fetal monitoring device attached versus one that doesn’t. We do know that the conditions that a baby experiences during a normal birth are poles apart from a baby which has something drilled inside its head and attached on it, so it is impossible to get an apples against apples comparison.

So why do they do them? Well like most of theses procedures, they do them for money. Plain and simple. The child birth process in a hospital is geared to extract as much money as possible from the parents. Whether it is a direct fee for the use of a fetal monitoring device, or as a precursor to the big cash cow, caesarean sections. Fetal monitoring devices increase the profits they make from a childbirth delivery.

Studies have shown that after fetal monitoring is introduced in hospitals, the rate of caesarean sections jumps by at least 3 times. That is a lot of extra money for the hospitals, but considering that 5 times as many women die from this procedure compared to normal deliveries, that means that as a mother giving birth, you have a far higher chance of dying if you use fetal monitoring. Statistically, you can’t argue with this fact.

So what about the risks for the baby who is having something drilled inside their head. Often they are delivered with blood pouring from the wound, other times scalp abscesses form requiring antibiotic treatment, and many of the injuries come from trying to remove the device itself. Long term, the scars from these injuries can be permanent, and they look far worse when the device was incorrectly attached, because they don’t really know where they are putting it. They are just slotting it in and they put it on the babies face or some other position where it is not supposed to go on, and the child is left with a horrible scar on their face for life. If they do get it on the head, many times hair never grows there, and the person grows up to be an adult and they have a bald spot from the fetal monitoring device.

Oh, and death. Let’s not forget that one. Now I know this video will attract a lot of haters. Both from doctors who rely on the money from pushing these barbaric techniques onto their patients so they can get more payments for their luxury cars, and the other ones are going to be gullible mothers who had this procedure and who were duped into getting one.

The doctors told them “it was necessary”, “it saved your baby’s life”, or “the benefits outweighed the risks”. They use the same excuses for caesarean sections and the parents parrot them to mask their internal guilt they are feeling since they have harmed their baby. The facts are that it is never necessary. The facts are that the risks greatly outweigh the benefits. How would you, as a mother, like to have a 5 times greater chance of dying during childbirth? Or for your baby to die during the procedure, or if your baby is left permanently scarred or disfigured.

The problem comes from blindly believing everything the salesman, I mean doctor, tells you. Without questioning. Without thinking. You have a brain. Put it to use and think for yourself. Stop this inhumane and barbaric practice of implant fetal monitoring.

This is just one of the dangers of hospital childbirths. To learn about the other childbirth dangers, visit my website at healthglade.com

Alopecia is caused by the Hepatitis B Vaccine