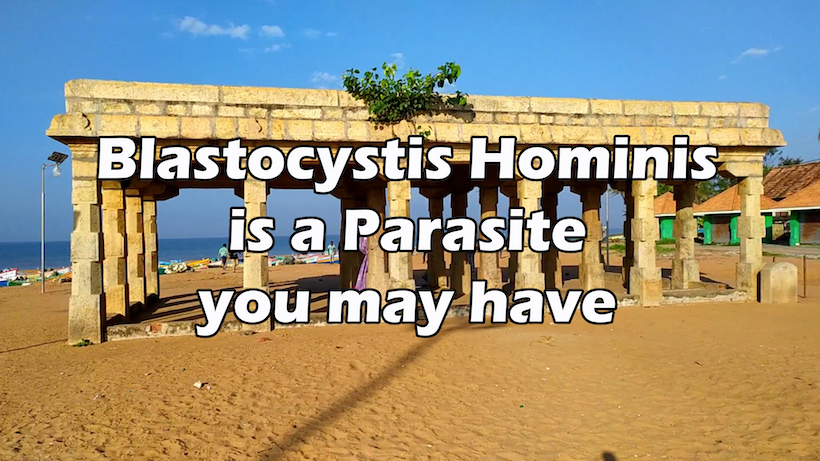 This video, Blastocystis Hominis is a Parasite You May Have, was filmed at Arattu Mandapam at Shanghumukham Beach, in Thiruvananthapuram, Kerala, India.

Blastocystis is a type of parasite which lives in the gastrointestinal tracts of animals, reptiles, insects, fish, and humans. It’s one of the most common parasites in the world, and an increasing amount of studies are confirming why it is now believed to be the root cause of a wide range of human diseases.

Common symptoms include gas, bloating, flatulence, abdominal pain, diarrhea, fatigue, hives, and multiple food sensitivities. The last one is interesting. While a normal food sensitivity can be resolved by not eating the food, when you have Blastocystis, you keep developing sensitivities to different foods. Does this sound like you? You used to be able to eat anything, but now many of those same foods keep causing reactions, and the list keeps growing, with more and more foods you become reactive to?

Another interesting connection is seen in patients with Hashimoto’s disease, with a significant portion of them testing positive for Blastocystis.

An Egyptian study found 61% of patients with hives had Blastocystis, compared to just 8% of the control group without hives. Other studies have found that up to 73% of patients with IBS had it, and significant portions of Hashimoto’s disease patients tested positive for Blastocystis.
To be honest, parasite detection methods are highly unreliable, with many false-negatives seen, so these numbers may even be higher.

The good news is that eradication of the Blastocystis parasite very often leads to a complete remission from IBS, hives, Hashimotos, fatigue, and food sensitivities. This makes sense.

It’s not the only cause of these conditions, but in most cases it is, so when you get rid of the cause, the problems go away. If you are suffering from any of these conditions, there is a good chance that the Blastocystis parasite is the root cause, and should be investigated.

But so many people have this parasite, with tests showing over 50% of the population in underdeveloped countries, and up to 20% in developed countries, that it may be a good idea for everyone to be tested. If you are in the early stages, you don’t want to let the parasites grow into large colonies and cause serious disease.

There are multiple testing options available, each with varying degrees of accuracy, and a number of natural health treatments to expel the parasites. For more information on testing and treatment options, visit my website at healthglade.com

Rumble is a Controlled Video Platform

Awaken the Healer Within Summit